So, in one week we had:
Scraped our ceilings,
peeled wallpaper,
Painted every inch of everything,
and installed crown moulding.
We felt extremely accomplished and were pumped to start cleaning up and move into our abode.
There were only two items left on the to-do list...

In one bedroom there was a sag in the ceiling right over a window.  During our inspection we inquired about this thoroughly.  Our inspector examined the area from the interior and the exterior wall, tested it with his moisture meter and concluded that "Sometime in the history of the house, there was a leak here.  This leak has now been repaired and is no longer active.  The problem is now simply cosmetic. That part of the ceiling can be removed and a new patch of drywall can be put in its place."  Easy enough, right?  So we had a builder come over to look at fixing it (after Chris and his dad attempted and realized they were in over their heads).

In another bedroom there is a long dark closet that is only accessible through one door and so we planned to add a second door on the other end so the closet would be more usable.  So, we planned to have the builder add another door for this closet along with repairing the ceiling.

So when, "Paul the Builder" (my family lovingly calls him this so he won't be confused with Paul my brother in law) came over to make these minor repairs for us, he unfortunately found some MUCH BIGGER PROBLEMS.

He started by looking at the closet.  As he was mapping out where he would place the door, he happened to take one step right next to the exterior wall.  One step away from the wall he was on solid ground, but riiiiight next to the wall (a place that our inspector surely never stepped) was like a trampoline.  The floor boards were clearly floating on nothing, meaning that the floor joist beneath was completely rotten.  Yikes.  Our builder explained to us many reasons why this was detrimental to the house and could be a safety issue for the support of the walls and must be repaired immediately!

After assessing the floor issue in the back bedroom, we moved on to the next bedroom to have a look at the "minor, cosmetic repair" needed in the middle bedroom.  Paul the Builder was quickly able to assess that the leak in the ceiling was extremely active and there was going to be extensive damage.

The days after these discoveries were some of "down in the dumpiest" times for Chris.  He had just made the biggest purchase of his life (of which I'm sure he was fearful enough), and now he could just see the bills piling up to provide a place for him and his wife to live.  Of course, I held true, and naively still believed that we would move in at the end of the week, but Chris knew it wasn't so.

Paul the Builder set up camp at our house for the next few days, working alone (to keep costs down) to assess and repair the damage, starting with the middle room.  Paul made phone call after phone call to Chris with more bad news about the damage.  There was water running from the roof into the walls and over the next few days of working he found that it had completely rotted out almost all of the wood in the ceiling, exterior wall, and some of the floor joists in that room as well as the neighboring bathroom.  When I came to the house after work to find that in that room the floor was partially removed, there was no ceiling (you could see straight into the attic) (remember, the guys scraped this ceiling and put crown moulding in this room and we painted it.) and most of the exterior wall had been taken down, I finally realized we wouldn't be moving in soon at all.  The entire room (and much of our house) was covered in black soot and dust from 70 yr old insulation that had fallen from the attic during the demo as well as broken plaster and drywall dust. 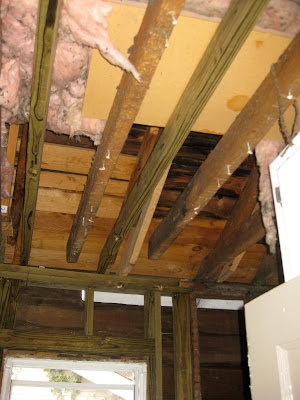 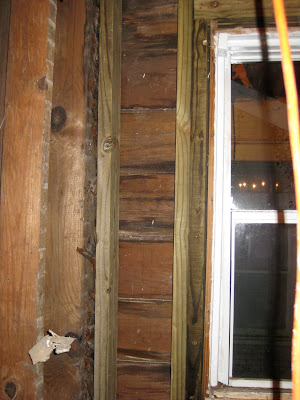 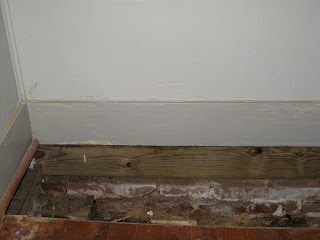 Nonetheless, our lease at our apartment was up, and we couldn't afford to pay the inflated monthly rate along with our new mortgage.  We moved out of our apartment and stacked our furniture and boxes into the two rooms in the house without extensive damage.  We packed suitcases and moved in with my sister Liz, her husband Brett, and their three children (under the age of 9).  They have a private guest room in the basement and live about 3 blocks from our new house and so it was very convenient for us to stay there.  They were very gracious to let us stay, and we really enjoyed some of the late-night conversations at the kitchen table.

Everyday after work, and all weekend, we would go to the house and Chris would assist Paul the Builder in the repairs while I finished up painting the rest of the house and tried to clean up and manage the debris from the construction.  When Paul would go home for the day he would give Chris direction on things Chris could do himself to speed the process.  If we left by 11pm it was an early night; most nights we worked til after midnight.  We had a lot of continued help and support from our friends and family.  We could not have done any of it without them.  My brother-in-law Brett was instrumental in helping Chris work on the house.  He is an estimator for Brassfield & Gorie Construction and is extremely handy and knowledgable about building.  He helped Chris so much and spent many nights and Saturdays getting into the knitty-gritty jobs with Chris.  My sister, Liz, was patient while we kept her husband away from home so much during that time and she often had to get all the kids fed, bathed, and in bed without Brett there to help.
Thank you Liz & Brett!!!

Here's a pic of their family... 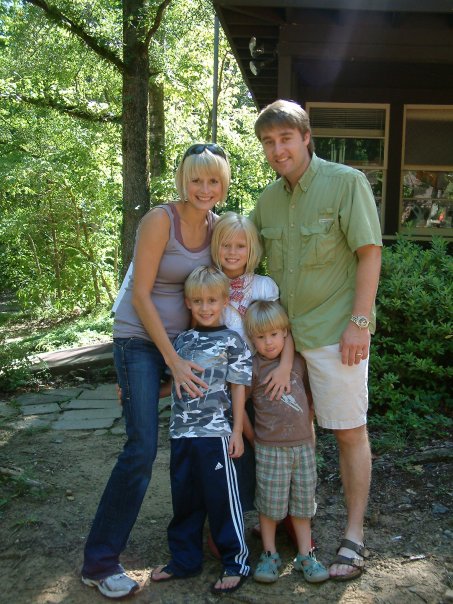 (Liz's blog)
After the rotten wood was replaced, and new sheets of dry wall were put up, one of the most time consuming steps was the drywall mudding and patching.  It involves applying, smoothing, drying, sanding, and REPEATing!  It was raining a lot and the air was moist, which was NOT helping the drying process. 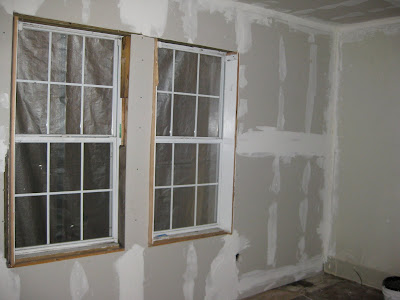 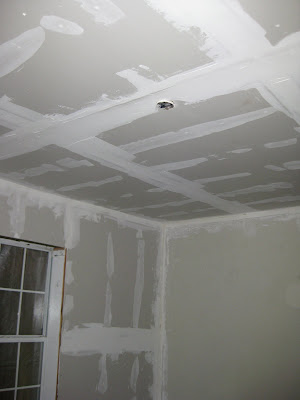 We did eventually manage to replace all the rotten wood and put up new drywall in all the problem areas: 1 closet wall; all bathroom walls and ceiling;  wall, ceiling, and floor joist in middle bedroom; floor joist in back bedroom.


...if you likey to readee, then postey a commenty...
Posted by Sara Walker