The rest of the story

You see, I started this blog with a purpose.  A certain agenda.  A story I wanted to tell.

But there is a problem, going by the letters of O-C-D, that kept me from just coming out and saying what I wanted to say.  Why?  Because it has to be in CHRONOLOGICAL ORDER....of course!  Thus, I began this blogging story with "How we met".  Then I talked about our wedding, and where we lived for the first year.  Then after a short hiatus for the holiday season, I am ready to get to the real story.
Buying a house.
Chris and I kept our eyes open for houses on the market for about a year while we were living in our apartment.  We kept up with the real estate listings online for the areas we wanted to live in.  In June of 2008 we began to actually go to open houses and meet with agents.  We saw a lot of houses on our own just by calling the agent listed for the house.  We weren't sure yet which agent we wanted to use, so we used this as a way to interview agents.  Before too long we had decided which part of town we wanted to be in.  Unfortunately, our decision didn't match our budget too well.   But we pressed on and scoured this area for great deals.
Then we came upon this house online... 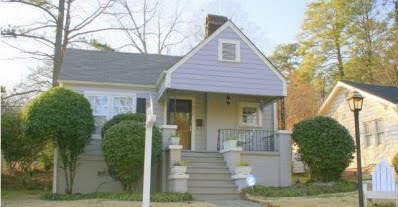 It was on the high side of our price range, but it was a 3 bedroom house.  It had dropped $40,000 in price that week.  All the other houses we had been considering in this area had only two bedrooms and were actually more expensive.  We were very hopeful.
When we pulled up to the house the next day, we looked at each other and said "This could be it!".  It definitely needed some help cosmetically, but we knew we would have to buy a fixer-upper in order to be in the area we wanted.
When we went inside, we tried to like it.  We tried to love it.  But we just couldn't.  We left and dismissed it as "Almost but not quite".  We were bummed and just couldn't explain why we didn't fall in love with it.  Then that night I couldn't sleep.  I started going over in my head trying to figure out the things that I didn't like about it.  I realized they were all cosmetic...things like tile, paint colors, wall paper, no crown molding, popcorn ceilings, exterior paint and ironwork.  The next morning I woke up and told Chris immediately, "We are crazy.  We need to make an offer on that house today!  It's an amazing deal on a 3-bedroom in an awesome location!"
We put in an offer that afternoon, only to find that two other offers were turned in the same day!  We offered our maximum bid and prayed we would get it.  We heard later that night that the sellers went with another offer.  A few days later the sellers agent called our agent, Anna Lu Hemphill (who we adored) and asked if we wanted to be the official backup offer.  Of course we did.
But we couldn't count on this house, So we got back on the house-hunting trail.  The more we looked, the more we realized how great that house really was.  I kept telling Chris I had a strange intuition that that was our house.  Although we kept looking vigorously for other houses, I just knew that we would get that house.  Sure enough, about two weeks later we got a call from our agent.  The first offer fell through and we got the house!  We were thrilled.  We started on the paper work and having the house inspected.
Our closing was scheduled for Thursday Sept. 24th, 2009.  We had a whole crew of friends and family lined up for the weekend to help us paint, strip wall-paper, scrape ceilings, and put up crown molding.  We had to be out of our apartment by Friday of the following week and so it was going to be a race to get everything done in time to move in.  But, there were some errors on the paperwork, and so our closing had to be postponed until the following week.
The sellers were gracious enough to let us work on the house that weekend, and we had our official closing on Tuesday Sept. 29th.
We made record time on all of these projects!  We were finished by Wednesday.
Then on Wednesday, as Toby Keith would say, the "fit hit the shan".
Details in the next post.
dum dum dum........
...if you likey to readee then postey a commenty...
Posted by Sara Walker